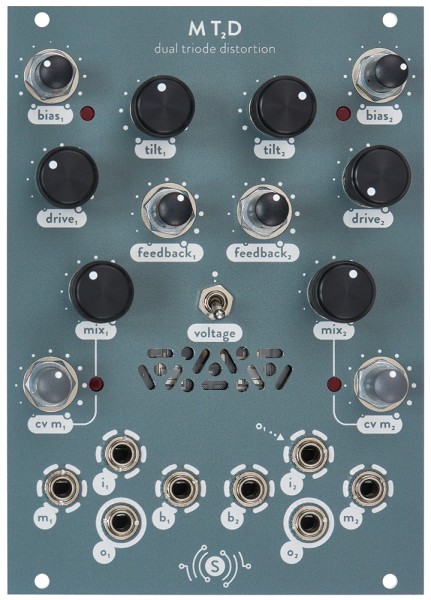 The Sonocurrent MT2D Dual Triode Distortion covers the entire range from soft saturation to haaaard clipping. The module consists of two (identical) units and invites you to explore all variants of parallel, serial and/or cross-connections. We can imagine many places in a patch for this module: As a waveshaper behind the oscillator, in the feedback path of delays, as a distortion before or behind the VCA. And it is especially suitable as stereo saturator at the end of the chain for delicate colouration of the whole mix. Or as a tool for external signals to add the finishing touch to a track or group track (drums!).

Sonocurrent is the new company of Graham Watson, who previously worked with Eric Schlappi (of Schlappi Engineering). This module is a partial collaboration with the latter, but also the first step for Graham Watson towards his own Eurorack portfolio. We can definitely expect some more modules in the future.

MT2D is a really good first appearance: Quality and ergonomics of frontpanel, knobs and jacks is excellent. And in terms of sound quality, it masterfully covers a very wide range.

The module owes its sound above all to the two NuTube triodes. This makes it the first module in Eurorack to use these new tubes, introduced by Korg/Noritake a few years ago. In contrast to classic tubes, you don't have to worry about your power supply and the durability is given as 30,000 hours. They are identical to classic tubes in construction and operation, but here the electrons flow through a Fluorescent Light Display. The sound is definitely “tubular”. And we take it as a sign that in the meantime NuTubes also found their way in HiFi (headphone) amplifiers and of course guitar pedals and preamps.

A very important parameter for tubes is the "bias", an (offset) voltage, which is manually adjustable on the MT2D and also via CV. This parameter influences the overtone structure of the distortion, which can then be further adjusted manually with "drive" and "feedback".

The "mix" dry/wet control is also CV-controllable. Especially when used at the very end of the chain, you can use it to dial in the effect very finely. Or you can also create a screaming distortion which can then be rhythmically gated or faded.

The spectrum can then be further influenced and worked out with the tilt filter. Around a fixed frequency it emphasizes the low end and thins out the high end by turning it to the left and the other way round by turning it to the right. The important parts of the spectrum can be easily accented in this way. Very subtle settings are possible here. But in combination with high feedback settings you also can "collapse" the signal in one direction and let it scream.

In the middle is the switch "voltage". This is the only switch that has a global effect on both circuits. It influences the anode voltage and thus the basic character of the module, which can be changed between smoother distortion and really violent clipping. With the MT2D you will get a hugely versatile, stereo distortion and processing module. Hear for yourself at our showroom!

Sonocurrent is the personal endeavour of Graham Watson, who previously worked with Schlappi Engineering. Expect saturation and distorion aplenty.