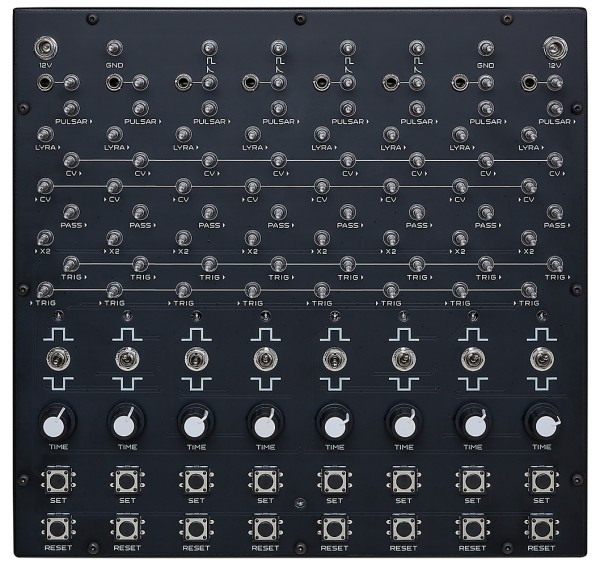 ORNAMENT-8 relies on a new principle for generating dynamic, rhythmic structures. It is described as a dynamic equilibrium within a horizontal structure, which generates the next moment from the present state. Ornament-8 thus behaves differently from known sequencer concepts, which are based on a fixed structure, with a tempo generator at the top and a memory for events on a time axis.

In certain key aspects, the Ornament-8 concept resembles a neural network, where there is no distinction between "processor" and "memory", where functions are merged and all structures are very flexible. There is also no dedicated clock generator or even a playback speed. Instead, what we have here is a structure consisting of eight identical and equivalent cells. Each cell is a controlled delay line that receives pulses, holds them for some time, and then passes them on. So here we are in the field of generative music. Ornament-8 can of course control Eurorack synthesizers and other devices with inputs for analog voltages, in addition to Lyra-8 and Pulsar-23. For Lyra-8 there is a special, versatile adapter.

Soma is Vlad Kreimer's "romantic engineering" endeavour into musical instrument design. While the Lyra-8 organismic synthesizer and the Ether wide-band receiver have already gained a bunch of adherents, the Pulsar-23 has created an unprecedented expectation.