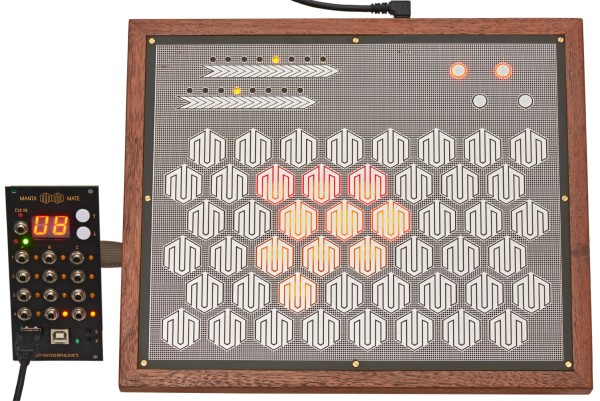 The Manta Bundle consists of the Manta and the Manta Mate. Manta is a controller with 48 hexagonal touch surfaces, two slider surfaces and four simple "buttons". In addition to notes and velocity, the touch pads also send MIDI CC data. The size of the area covered by the finger is also evaluated. Several sensors can be operated simultaneously. The controller is connected to a computer via USB. The Manta Mate serves as the interface for the modular system with twelve CV outputs, four of which are equipped with high-resolution 16-bit converters.

The Manta features a compact, wooden case. Its 48 touch sensors with background lightning are arranged in a hexagonal matrix with 6 x 8 zones. Each control element sends MIDI notes, velocity values and CC data. Alternatively to being used as a multi-touch controller, it is possible to employ the Manta as one large X/Y field. For connecting the device to a computer, an USB port was implemented. Operating systems recognize the Manta as a Human Interface Device (HID). Its latencies amount to approximately six milliseconds. The background lightning is controllable via the computer.

Modular systems and other analog equipment can be connected to the Manta via the Manta Mate. The module converts incoming MIDI data into control voltages. A total of twelve signals are emitted by the circuit. Together, Manta and Mate can be used, for instance, as a two-channel sequencer or a polyphonic hexagonal keyboard featuring up to four voices and microtonal scales.

The Mate’s arpeggiator can be synchronized to external equipment via a clock input. The same applies for the sequencer mode. It is tailormade for the Manta controller and transforms the setup into a composition tool with two tracks. Each channel features up to 32 steps, multiple patterns and shift functions. Finalized configurations and sequences can be stored inside the Manta Mate.

Besides being Director of Electronic Music at Princeton University and the Director of PLOrk (Princeton Laptop Orchestra), Jeff Snyder still finds time to run Snyderphonics, creators the Manta tactile controller and the Manta Mate module, which translates all sorts of MIDI and HID signals into CV.